In February 2021, Université Côte d’Azur-CNRS Electronics, Antennas and Telecommunications laboratory (LEAT) and TAS Group formed a partnership to test performance and explore prospects for a large-scale deployment of blockchain used to secure and authenticate data for the activation of smart contracts. These new technologies could, for example, revolutionize the way in which claims between connected vehicles are managed in the coming years.

A blockchain use case studied at the LEAT laboratory of Université Côte d’Azur, part of the French National Center for Scientific Research (CNRS)

Today, in the event of a road accident, the insurer consolidates data resulting from a report filled in by hand by the protagonists. This data may be, intentionally or not, incomplete or even false.

In the future, a device installed in the vehicle could send data automatically collected on the vehicle (identity and vital functions of the driver, speed, positioning of the vehicles, etc.) to a blockchain. A Smart Contract could then process this data in a completely decentralized, more objective, fairer and more secure manner. The claims for loss and follow-up provided by the insurance company could be triggered automatically based on this data. This use case is the one selected by LEAT for its Smart IoT for Mobility project led by Prof. Verdier, in partnership with Renault Software Labs and Symag ( BNP Paribas subsidiary). Started in 2017, it can now count on TAS Group technology to move on to a larger-scale testing phase.

Through the partnership, TAS Group provides LEAT with a cloud service platform for containerized applications and brings its expertise in application cloudification to the laboratory. LEAT’s exploratory work will thus be brought to the Cloud while adapting and respecting the different types of process. This will allow researchers to benefit from a network test architecture to study the behaviour of models developed in their laboratory and very realistically simulate the deployment of their applications.
The containerization of the blockchain will allow the use of micro-services to facilitate the deployment and orchestration of the architecture. The solution will also allow the adoption of agile methods based on "DevOps" principles.

A blockchain is like a database in which the information entered is neither editable nor deleted, and is publicly readable and cryptographically secure. Blockchain is based on the principle of collective trust. By entrusting the validation of a transaction to a multiplicity of computers rather than to a human, a fallible trusted third party, the risk of error, fraud or corruption is eliminated.

What are Smart Contracts?

Smart Contracts are the natural evolution of blockchain. These "smart contracts" are computer programs stored in a blockchain, designed to automatically execute a set of predefined instructions, based on data from the blockchain.

They are automatically executed and self-enforcing contracts. They are governed, without possible dispute, by the explicit terms and conditions set out therein, without one or more people, often qualified as trusted third parties, having to intervene to establish their authenticity and trigger the execution. In the case of vehicle insurance contracts, this new generation of contracts could replace traditional contracts in the future. 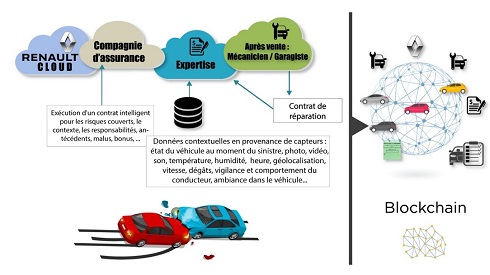