The cybersecurity company Surfshark conducted a study on countries with the highest data breach rates worldwide.

According to the study, Iran has the highest breach density in Asia and worldwide, with 231 breached email accounts per 100 internet users in 2021. 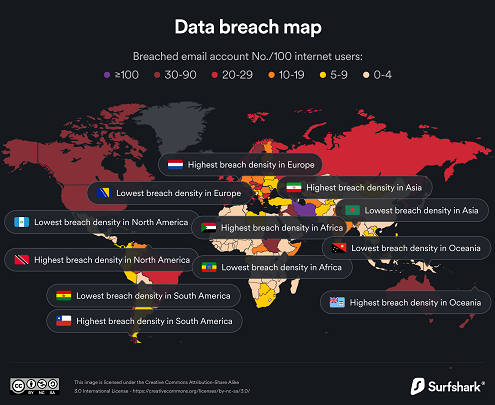 The study also found that:

Commentary by Agneska Sablovskaja, Data Researcher at Surfshark: "Looking at the data breaches landscape in 2021, we see that 71.7% of the analyzed countries have a breach density that’s lower than the global average. It shows that hackers usually target particular countries such as Russia and the US more than others. However, 6% of all analyzed countries have an extremely high data breach density. To put this into perspective, more than half of internet users in countries such as the US, Iran, Israel, the UAE, and Qatar got breached in 2021."