According to data analyzed and presented by Atlas VPN, 2021 marks a record year for the development of new Windows malware. Even though 2021 has another month to go, cybercriminals have already developed a whopping 107.28 million unique threats targeted at Windows devices.

The data for the analysis was provided by AV-TEST GmbH, an independent research institute for IT security. The figures were last updated on November 23, 2021.

Interestingly, the creation of new malware types targeted towards Windows OS devices has been growing steadily since 2012. On average, the quantity of new malicious software samples grows by 9.5 million or 23% YoY.

In other words, cybercriminals employed more of their resources towards Windows OS than ever before. To put things in perspective, threat actors developed around 328 thousand malware samples daily in 2021.

Cybercriminals work together to reduce costs

The fact that malicious software is easier to develop than ever before contributes to this unprecedented increase in risks.

Hackers no longer require advanced programming abilities because they can buy ready-made malware code, customize it to their needs with a little coding, and create an entirely new malware type.

Moreover, the wide availability of hackers-for-hire made prices ridiculously cheap. For example, one of our earlier analyses uncovered that hiring attacks on the dark web cost as little as $250 per attack. 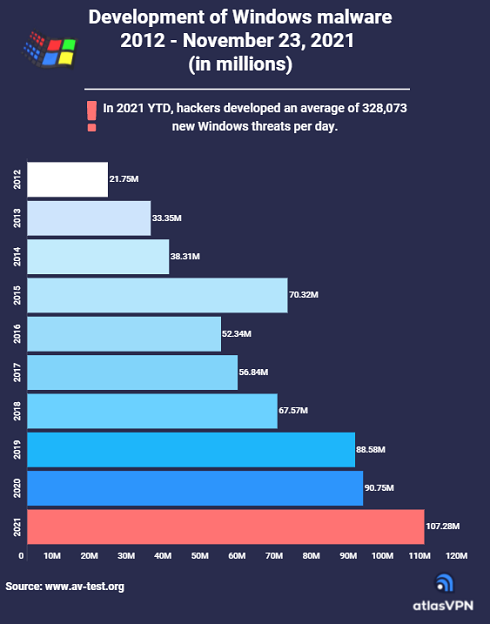