Ontrack announces that almost four-in-five (78%) of the data recovery requests it received in 2020 were for either ageing or physically damaged Hard Disk Drives (HDDs). This compares to only 3% of requests being for solid-state drives (SSD), 3% for RAID servers, 3% for other servers, 2% for flash recovery, and 1% for USB sticks. The remaining 10% of data recovery requests were for mobile devices. 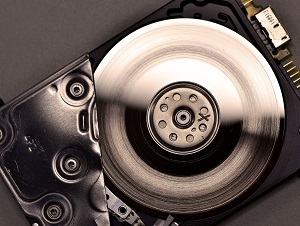 Whilst the need to recover business-critical data could be following unexpected events such as water damage, fire damage or simple human error, it is more commonly due to the failure of ageing IT infrastructure. That infrastructure footprint is only getting bigger too, with the average employee now having seven separate network-connected devices.

First introduced by IBM in 1956, HDDs are an electromechanical data storage device that became the de facto means of storing and retrieving digital data across millions of servers and personal computers throughout the globe. Unfortunately, due to their many moving parts, hard drives are very susceptible to knocks and drops that can result in data loss. Whilst in recent years solid-state drives (SSDs) have been replacing HDDs where speed, power consumption and durability are important, SSDs shipments continue to lag behind HDDs by 29%.

"You can generally rely on your hard drive for three to five years; its lifespan will depend on many variables – not least how often you read/write data to it. Businesses should document the current lifespan of the hard drives they have in situ. Doing this will help to provide a clear timeline of when a hard drive is more likely to fail, resulting in data loss," says Philip Bridge, President, Ontrack. "But it’s not only the age of hard drives organisations have to be wary of, they also have to consider their fragility."

Ontrack has been the global leader in data recovery services since 1985. Headquartered in Minneapolis, Minnesota, Ontrack now has 18 data recovery labs around the world. Since its inception, it has been responsible for over half a million data recoveries and counting.

From one of its cleanroom facilities, Ontrack can recover lost and damaged data from tapes, hard drives, solid-state drives, flash media, mobile devices, virtual environments, and a myriad of other storage devices, not to mention from virtually all operating systems. Additionally, the company offers custom solutions to address complex, high-end enterprise environments and newly emerging technologies.

“Whatever the nature, severity or circumstance of the data loss, it can be a very frustrating and stressful time,” adds Bridge. “From the simple to the most complex and catastrophic, no two recoveries are the same. However, this year we have seen a lot of issues with ageing and physically damaged HDDs. Our advice to businesses is to consider modernising your IT estate as part of your wider digital transformation. Whilst we can recover most data if instructed early enough, there is a data black hole swallowing up petabytes of data each year through hardware failures.”