Enterprise Ireland recently organised an event to present the different opportunities for Irish Cybersecurity companies in their development within European markets. For this event, two expert consultants from CEIS: Axel Dyévre, Associate and Pauline Massart, Deputy Head of the European office presented the results of their study on how to approach the European Market using 8 sample countries: France, The UK, Belgium, Italy, Spain, The Netherlands, Germany and Poland, as well as a more global approach for all of the international European institutions and NATO. Then a panel of experts launched the discussion on this same topic. The European Market appears to hold a significant amount of potential for the development of Irish companies. 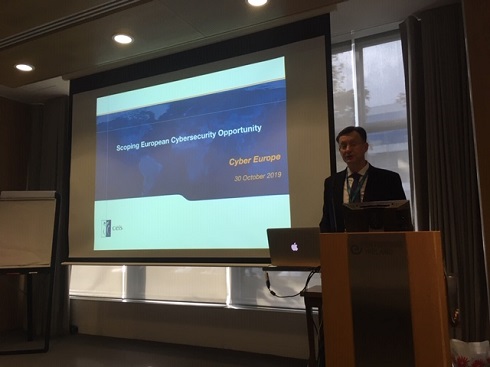 Following the welcoming address given by Matthijs Egger, Market Advisor for Enterprise Ireland Benelux, Leo McAdams, Divisional Manager of International Sales & Partnering, Enterprise Ireland opened the event by thanking the 25 Irish companies for their participation as well as Pat Larkin, Board Member of Cyber Ireland, the association representing Irish companies in the cyber industry. He announced that Ireland has serious ambitions to develop in European Cyber Markets and will invest the necessary means to do so via their overseas development agencies. He also announced the opening of a new office in Lyon, on top of an existing office in Paris as well as a second agency in Germany. 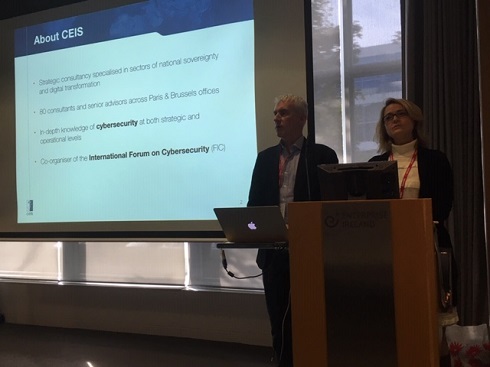 Next Axel Dyévre, Associate, CEIS and Pauline Massart, Deputy Head of the European Office, CEIS presented the results of their study. In the introduction, they quickly outlined the legal context in which different regulations such as GDPR, the NIS directive etc… have had an influence on the market. They grouped the countries into three clusters, the first group included the United Kingdom, France, Germany and the Netherlands, the second with Belgium alone and the third with Poland, Spain and Italy.

The first cluster represents a large market in terms of growth but has a lot of regulation. For the second cluster the market is small but is home to several international organisations. Finally, the third cluster shows strong potential with little regulation outside of existing European initiatives but represents a smaller market size in comparison to the first cluster.

CEIS then they went into more detail on the opportunities and characteristics of the cyber market country by country.

In Belgium the cyber market amounts to €350 Million. Numerous international organisations have set up in the Belgian territory which allows the country to offer better opportunities for companies to do business here.

For France, the cyber security market amounts to €2,500 Million in revenue. The ANSSI (National Cybersecurity agency of France) plays a strong role. The market is driven by the state. There are several large-scale international integrators in the market such as Atos, Capgemini, Sopra Steria…or even Airbus and Thales. Over 130 start-ups have been identified in the market. The market is mature with a strong demand for solutions that protect critical infrastructure as a result of the Military programming law.

As for Germany the cyber market is valued at €5,700 Million. This is a very mature market driven by regulation and the BSI (federal office for Information Security). The country invests around €200 Million in innovation for the sector. With numerous software companies such as IBM, Symantec, Rohde & Schwarz, TeleKom Deutschland…the cyber market is driven by the need to secure digitalisation and by industry 4.0.

The Italian cyber market is valued at €1,100 million. The market is led by European regulation. There are many SMEs in the market. It is dominated by defense players such as Leonardo. The most mature sectors are banking and insurance.

In the Netherlands the cyber market is valued at €8,300 Million. The government is positioning itself as a Cyber hub. The private sector plays an important role. The market is quite open to international players coming from the US and Asia.

In Poland the market is valued at €1,164 Million with proactive support from the State. A strong increase in IT has been recorded with a rate of 10% growth per year.

The Spanish market is valued at €1,254 million and seeing a strong impact from GDPR. The market is dominated by Defense players like Indra. However, we can still see presence from the likes of Capgemini and Accenture. Spain is also the gateway point into the Latin America market.

In the United Kingdom the market is valued at €6,400 million. It is mainly led by the financial sector, and demand from the public and health sectors.

In conclusion, the three clusters show that there are three different approaches to these markets even if each country needs to be tackled individually. Firstly, the software companies need to make themselves known and to be recognised. They also need to invest as much time as they do money. They need to participate in key events in the local markets in order to get their name out there, to meet customers and potential partners. For Start-ups, it is best to work through integrators but to make sure that they don’t lose touch with their end-user customers. Being certified is a must. Moreover, it is best to be compatible with the main solutions and architectures in the market. They must have an effective programme that will motivate their resellers and integrators. The solutions must of course address the “hot topics” of the cyber world. Finally, they must keep a close eye on the evolution of national and international regulation. 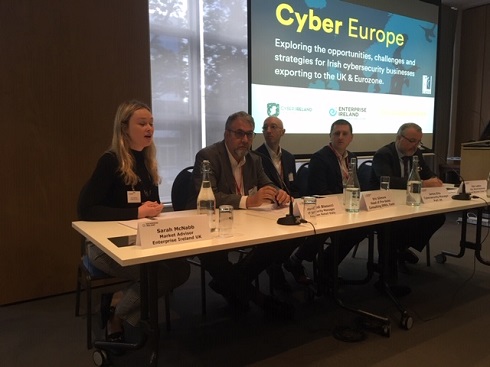 Eric Gilmore considers that even if there are opportunities in France and Germany, these markets can often be quite difficult to tackle. Manfredi Blasucci considers that in Italy the market is organised around resellers. The main issue in Italy for Cyber remains around cost, which he believes is a question of market maturity. Nevertheless, GDPR has started to change people’s mindset especially in large companies. Pat Larkin and James Ellis both outlined the necessity of working with international players who will be capable of deploying the solutions in many different countries. Eric Gilmore added that having support in the local language of the country is a must. Manfredi Blasucci considers that in addition to price, translation of solutions into Italian and having local partners is necessary especially when approaching companies in the south of Italy. It is therefore essential to attend events but also to use Enterprise Irelands services. Moreover, he explains that cybersecurity solutions don’t necessarily have to “reinvent the wheel” and that by being certified you can reassure clients. Eric Gilmore agrees that it’s important to build client relationships based on trust and to keep a close eye on regulatory updates in order to succeed in Europe.

Manfredi Blasucci mentions that this can bring up new challenges such as the cloud, collaboration etc…we need to develop a new approach in order to understand the issues and produce the best solutions. Eric Gilmore believes that there is a need to communicate with market players in order to have a better understanding and to find new offers.

To conclude, Pat Larkin explains that his cluster, Cyber Ireland, brings together entities from the Public sector, private sector, universities and start-ups. There are about 50 multinationals, 50 SMEs and around 20 universities and public organisations as part of the cluster. This association is backed by IDA the public body that attracts companies to set up in Ireland. The aim of Cyber Ireland is to support R&D activities in the sector, find talent, encourage interactions between large companies and start-ups and to promote the solutions in foreign markets. This association is based in Cork.

With Brexit on the horizon, there are certainly numerous opportunities taking shape for Irish companies keen to set up in Europe. Incidentally, according to Enterprise Ireland’s experts they have never had so many requests from Irish companies looking to bring their solutions into the European market. Could Europe be the new Eldorado for Ireland? Only time will tell…