Internet censorship around the world: The real reasons behind online restrictions

The internet outage around the world has become the norm with the latest news about the Iranian government shutting off the internet for nearly all of its population of more than 80 million. The authorities say this was done to silence protests over rising gasoline prices. But sometimes official motives for switching off the internet may be different from the actual ones.

“Governments block internet content for three main reasons: to maintain political stability, protect national security, and impose traditional social values,” says Daniel Markuson, the digital privacy expert at NordVPN. According to the expert, the reasons vary from country to country. In fact, states with the most severe online censorship rely on all three motives at once.

The infographic below takes a look at the countries with the heaviest internet censorship. It also lists their motives for cutting down access to global websites. 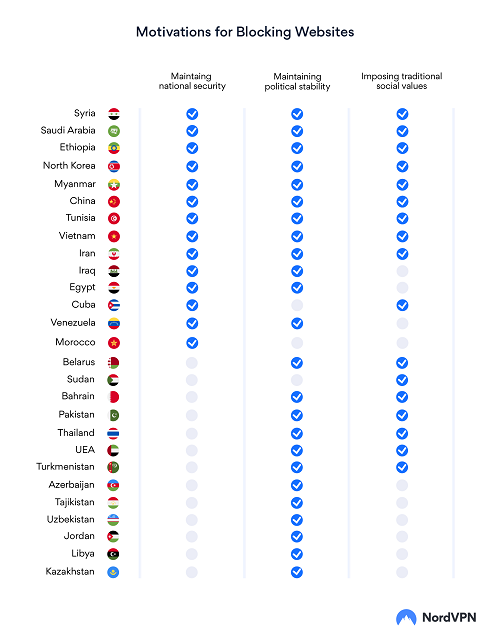 For example, North Korea has the highest level of online restrictions in the world, with only 4% of the nation having access to the internet. The limited access that exists is controlled and censored by the government. The main motive behind this is to avoid the outside influence and information leak.

China is another example of severe internet censorship. The country uses advanced technologies to block IP addresses, obstruct access to various websites, and block search engines, such as Google, Facebook, Wikipedia, and others. This blockade is usually called the “Great Firewall of China."

Saudi Arabia stands out among the most censored countries. It puts a strong emphasis on imposing its social and religious values. Saudi Arabia has blocked more than a million websites that contain any contradiction to Islamic beliefs. Any threat to Islamic social and political principles is also filtered and blocked.

According to research provided by the #KeepItOn campaign, there were 196 internet shutdowns across the world in 2018. 134 of them were in India, and the rest occurred in a wide range of Asian, African, and Middle-Eastern countries.

The report states that official and actual causes of the internet shutdowns were different. In most cases (91), the blackouts were justified as a way to maintain public safety. Other reasons include national security protection (40), sabotage (2), stopping fake news and hate speech (33), and school exams (11). Six internet shutdowns happened for no reason, while the motives remained unknown in 13 cases. 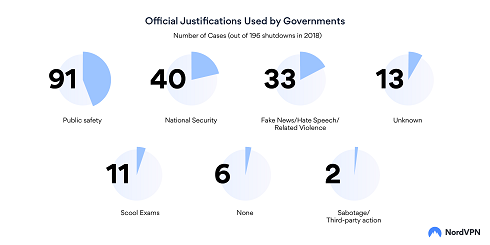 However, the actual causes differed from their official explanations. Government justifications rarely matched the causes reported by the media, civil society organizations, and free speech activists. The majority of shutdowns occurred in response to militant or terrorist activity (especially in the Kashmir area of India) (53), protests (45), communal violence (40), elections (12), maintaining information control (11), preventing cheating during school exams period (11), and other events, including religious holidays (16). The reasons for eight internet shutdowns were unknown. 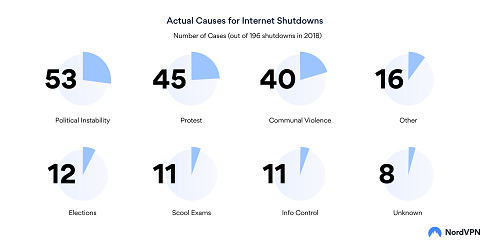 “Governments usually claim to be responding to public safety issues when they shut down the internet. The real reason, however, is often to suppress protests. By limiting access to the internet, they limit people’s ability to organize demonstrations,” claims Daniel Markuson, the digital privacy expert at NordVPN. Similarly, shutdowns that are reported as fake news prevention may actually be the authorities‘ responses to elections, community violence, or militant activities.

Daniel Markuson says that “no matter what grounds are used to justify internet shutdowns, they violate human rights and our freedom of speech and expression.” Luckily, there are tools that help people in need of secure connections.

A VPN (virtual private network) securely bypasses online restrictions and helps keep communications away from prying eyes. For example, NordVPN advocates for digital freedom by providing open access to the internet and securing people’s private data. The service sends internet traffic through an encrypted tunnel, which makes it almost impossible to hijack. It hides IP addresses and real locations. By connecting to another country’s server, users can set their location to virtually anywhere in the world.