From AI to cybersecurity: Popularity of key technologies help drive up total TMT M&A deal value by 169% in 2021, says GlobalData

In the first six months of 2021, mergers and acquisitions (M&A) in the tech, media and telecom (TMT) sector totaled $555bn, according to GlobalData – that’s a huge 169% rise from the same period in 2020.The leading data and analytics company notes that, in H1 2021, the software and services sector accounted for half of overall TMT M&A activity, with total deal value hitting $278bn and deal volume reaching 278 driven by the popularity of key technologies, including artificial intelligence (AI), big data, cloud, cybersecurity, digital media and fintech.

Snigdha Parida, analyst for Thematic Research at GlobalData, commented: “The prominence of these themes in M&A activity highlights the central role that digital tools and technologies have played in helping businesses deal with the COVID-19 pandemic. It also showcases how imperative these have been in developing new ways of both living and working. Tech is an essential part of the future, and no one wants to be left behind.” 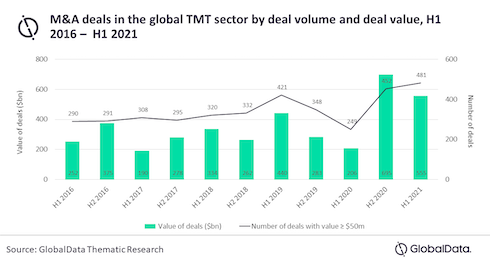