With 2 Trojans, 2 Exploits and 1 Worm as top five e-threats, this month’s chart changed a bit since exploits have a greater say in February’s malware distribution!

February comes with a surprise. Last month’s number one e-threat (Trojan.Clicker.CM) totally disappears from the current landscape. Instead, the generic mechanism to spread malware using removable devices such as flash drives, memory cards or external hard-disks - Trojan.AutorunInf.Gen – is the top e-threat of the month with 9.09 percent of the total amount of global malware. “External devices should be scanned on a regular basis,” advised Catalin Cosoi, Senior Senior Researcher at BitDefender® “This is a safe practice especially when these devices have been plugged in library computers, copy shops and other public locations which are known to be sources of infection” he added. 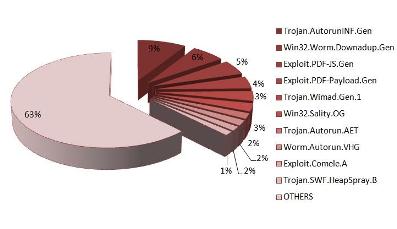 Win32.Worm.Downadup.Gen is up one place since January. Ranking second, with 6.24 percent, this worm exploits a well-known Microsoft® Windows® vulnerability. “Win32.Worm.Downadup.Gen’s continuous presence in monthly tops proves nothing else but most users’ reluctance to updating both the operating system and their locally-installed antimalware solution, as well as installing the security fixes issued by Microsoft® more than one year ago” explains Catalin Cosoi, Senior Researcher at BitDefender®. Newer variants of the worm also install rogue antivirus applications, amongst others. BitDefender’s® third and fourth e-threats for February are Exploit.PDF-JS.Gen with 5.13 percent and Exploit.PDF-Payload.Gen with 4.21 percent of the total amount of infections. These generic detections deal with manipulated PDF files exploiting different vulnerabilities found in Adobe® PDF Reader’s® Javascript engine. Their purpose is to execute malicious code on users’ computer. Torrents continue to be one of the favorite vectors of malware distribution. With a percentage of 3.37, Trojan.Wimad.Gen.1 is February’s number five e-threat, keeping its January positioning in top. A not yet aired episode of your favorite series or a box-office title could be the perfect cover for this Trojan. BitDefender’s® February 2009 Top 10 E-Threat list includes: